This was a good week for quilting.  I  started on some chimney sweep blocks that I'm making for an exchange with the Churn Dasher group in Virginia.  Here is the first completed block: 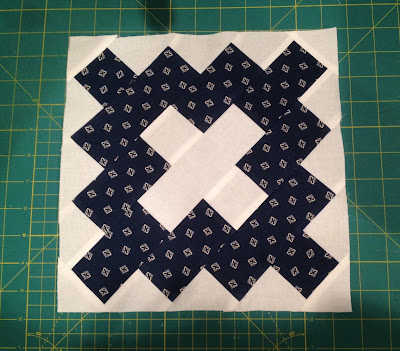 This block will finish at 10 inches square, and it's important to cut the outside triangle pieces so that straight of grain is on the outside edges of the whole block.  Otherwise, it would have a tendency to stretch out of square.

I made this sample block to be sure of my cutting and sewing measurements for the block.  After this one turned out just fine, I have cut the white parts for the remaining blocks.  Today I will have fun "shopping" in my stash for the dark and medium fabrics to make the rest of the blocks.

Here is the way I assembled it:  First I laid it out on a mat, in the way it would be sewn.  I sewed each row, returning the completed rows to the mat, to keep the block in order on the mat.  I left the corners for later: 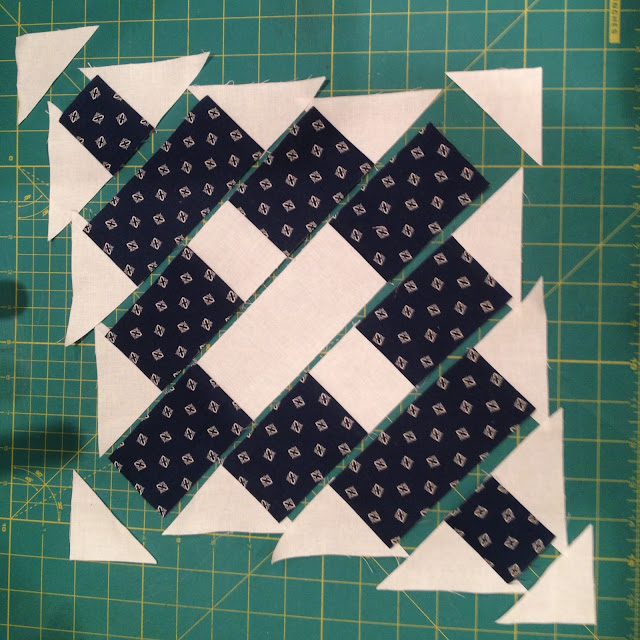 Then I sewed row to row to row.  The four corners were the last parts to add to the assembled block: 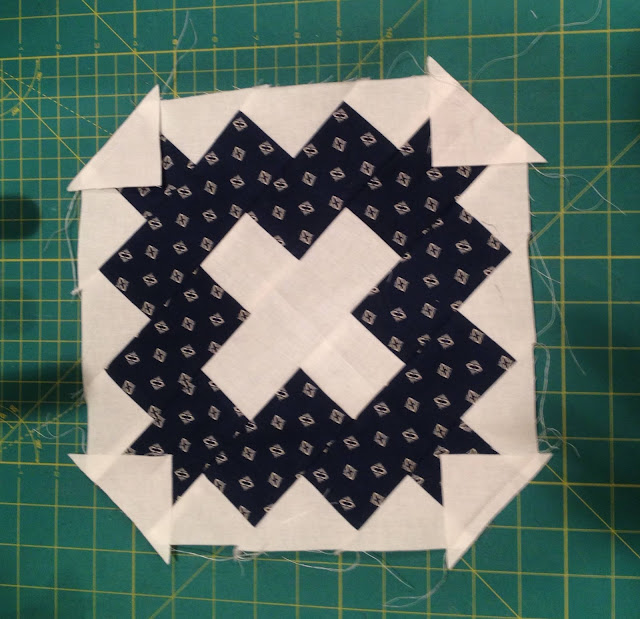 It is now trimmed to 10.5 by 10.5, and I am working this week on the rest of the blocks.  I should have them all on my design wall next Monday to show to you.

It's fresh apple time here in Michigan and today I made an easy apple crisp.  It is cooked in the microwave, for 6-7 minutes, so is very easy to make.  Recipe is on the internet:  (microwave apple crisp recipe)  I don't cover it with wax paper, but the rest of the instructions are very similar to my old recipe. 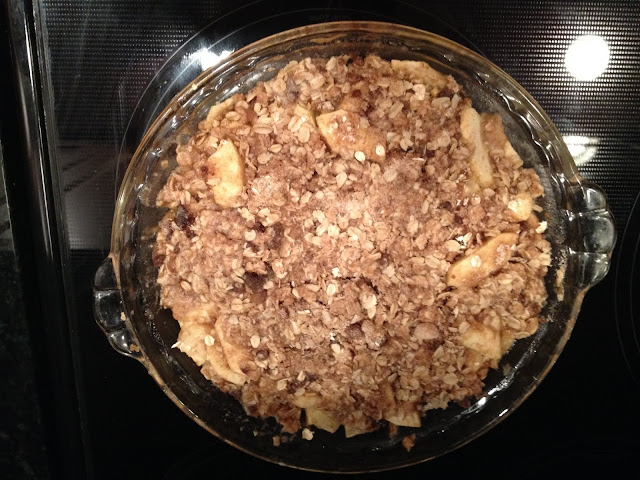 Yummy!  Well, that's what's going on here......what's going on at your house?  What is on your design wall this Monday?  I can't wait to see all the pictures.

You know the drill, please refer back to this particular blog post somewhere within your blog post.  Thanks!

Enjoy your stitching time this week. The Chimney Sweep blocks are going to be fun to make.

Beautifully sewn block, Judy! I have not made this block before. Your microwave recipe looks pretty darn yummy. It was actually cold enough to need an extra throw on top of the quilt last night. I'm going to have to put a blanket on too.

Our local farm stand gets its apples from Twin Maple Orchards in Galien, MI. They stock many varieties. We got two each of a dozen different kinds. My husband's favorites are Winesaps. I like Winter Banana. This morning I used six different apples to make a pie -- interesting to see how the flesh varies (not just the peel), from white to soft green to yellow.

Judy - what a gorgeous block! It doesn't hurt that blue, especially navy, and white are my favorite color combos. The petite print is very sweet. Thanks for the caveat of using straight of grain one the outside edges to avoid stretch. Every little trick sure adds to the bag of tricks and is helpful. I never know when I'll need that tidbit. You'll have a fun week making in-kind blocks. Tell Miss Penny Lane a big hello from me. I think of her often. I still think about a service dog. Funny - about six weeks ago, my son who lives in Arkansas called me at 1 AM to let me know that his dad was in the hospital in Tulsa so he was headed my way and would be at my house some time later. He used to have a door opener to my garage until my friends needed a way to be able to check on me when they couldn't rouse me. All he knew was that his dad might have had a stroke. It turns out that his dad had one seizure in the ER and probably several. One apparently caused him to fall to the floor at home and broke his anterior and posterior columns which support the hip socket. He had already had a hip replacement on that side. The hip socket was moved almost to his bladder. It took several days to assess what had happened to his brain so to be able to know when surgery was a viable option. The second day he was in the hospital, our son came home to me and told me that he could handle his dad and his dad said it would be fine if I went to the hospital to see him. We have been divorced for 20 years. So, I knew that meant that he would like to see me. We started talking and we are trying to see if it might be possible to work things out again for a relationship. Anyhow, we each have asthma which is one of the reasons that I have been reluctant about actively pursuing a service dog as much as one would help me. He currently has four small dogs and I cannot handle those dogs. We've already resolved that issue. He would be eligible for a service dog due to his seizures. However, it would have to be a large dog because he is a large man - 6'7". My children (son and daughter) and I have decided to leave that subject up to him to discover as he would have to be the one to totally care for the dog. I spent the night with my son a couple of weeks ago and his cat got on me in the night and I immediately had some slight breathing issues. So, I don't think an indoor animal is a good option for me. I wish it were because I do love dogs and cats. Every time I read your blog, I think of Penny. Thanks for an interesting post. Susan

Beautiful block. THanks for the process. I, too use the microwave for baking, but only in the summer. Your recipe is very like mine. In cooler days, I like to cook them in the oven so the aroma is all over the house. Yum.

I have never thought of making Apple Crisp in the microwave but what a great idea. A dessert we both love. Anyway, I like how you pointed out the outer triangles should have the straight of the grain. Just had to redo some of a Grasshopper block because I forgot about that. It is important, I'm realizing. That is a pretty block and the contrast of the colours make it stand out.