Replica of 1862 Crib Quilt and Why I Made It 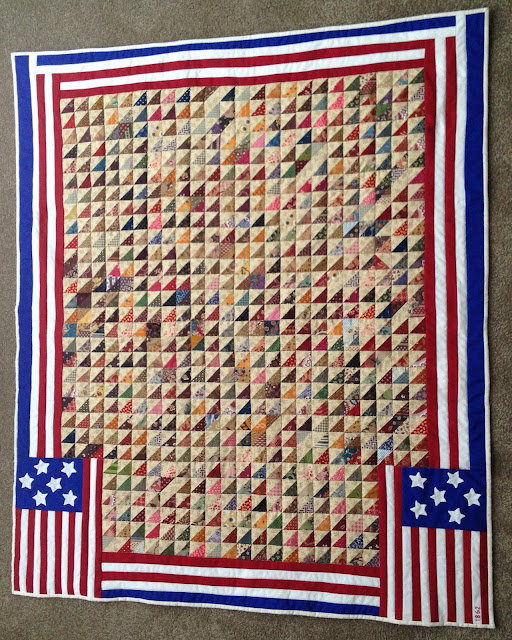 Sometimes people ask me who I am making a quilt for.....and I feel guilty when I say I'm just making it for the pleasure of making it.  I see quilts on the Internet that I love, and think......I'd love to have that quilt, but it's not possible.....But I can make my own version of it!


So that's why I make quilts - to have my own version of some of the lovely ones I see on the Internet.

When I was working on the snowball blocks for the quilt I blogged about last week, (Here) there were lots of small triangles left over from the corner cuts.  I asked the other members of The Churn Dashers to give me their leftovers too, if they were throwing them away.  So I set out to find a quilt that would use lots of small half square triangles.  I found this one (Here) and loved it.  I love the borders and how they are added.

Screen Shot from internet of the Quilt I like: 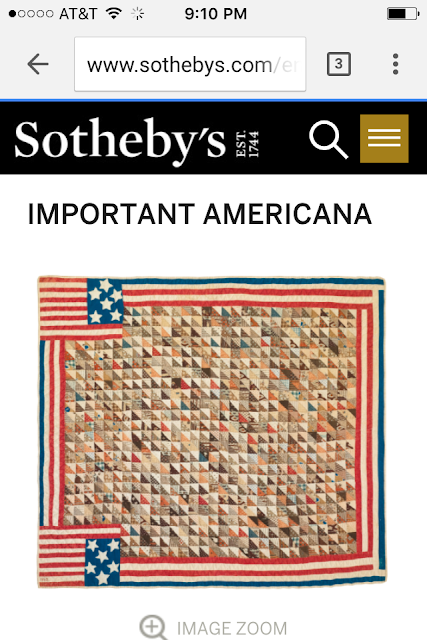 Then, after I started making it, I discovered that Barbara Brackman had posted about this quilt on her blog. (Here)  and again (Here) and again (Here)  Very interesting!  Barbara Brackman is a quilt historian and her blog posts are very informative.  Was it made in 1862?  We will never know for sure.  The original sold for $5,938 at auction, and measures 32.25" by 38.25".

Here's the story of my progress in making this quilt:

I started by printing out a copy of the quilt, and cutting the picture of the triangles into 5 sections, to concentrate on one section at a time.  The original quilt had notes somewhere that said the hsts were 1 inch, but when I did the math, it would make the quilt smaller than the original, and when I looked at making it with hsts that were 1.25 inch finished, the quilt would be slightly larger than the original.  I suspect the original had triangles that varied from 1 inch to 1.25 inch finished size.  Since the triangles I had left over were able to be trimmed to 1.25 inch size, I went with that size.  My completed quilt measures 38" by 45". 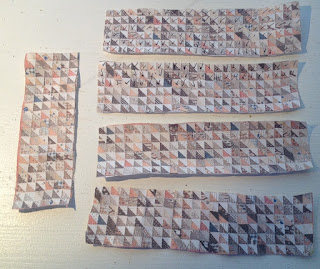 Here are the top two sections on my design wall: 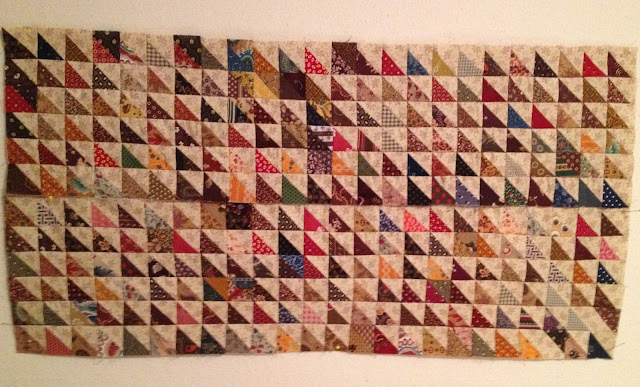 Picture of the back:

While making small triangles, I press everything open to make it a little less bulky with so many seams. 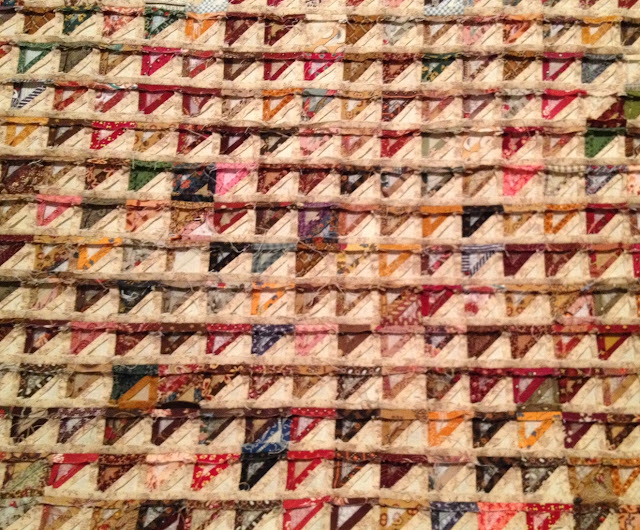 When I had the four largers sections of hsts together, I added the red, white and blue borders on three sides.  Then I made the "flags" of red and white stripes, and appliqued stars on the blue sections: 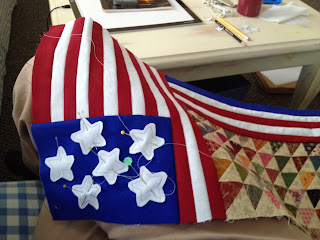 One final seam would connect the "flags" end to the four hsts section.  But I had a problem in that the "flags" end section was narrower than the hst section.  I remade the flag portions and made the red and white stripes a little wider. But then the opposite problem appeared: the "flag" end section was wider than the main hst section.  I decided to remove the blue stripe on the top and the bottom of the main hst section, and replace it with a much wider blue stripe, and then after the "flag" end section was attached, I could whack off the blue stripe part that was wider then the "flag" section just attached.  I hope you are following me on this.  It was a hit and miss way to do it, but it worked.  I was not about to make the two flags a third time.

Here is a picture of the complete top showing the blue stripes at top and bottom that are a little bit wider than they were on the completed quilt.  Picture taken just before I cut them down to the size of the "flag" end. 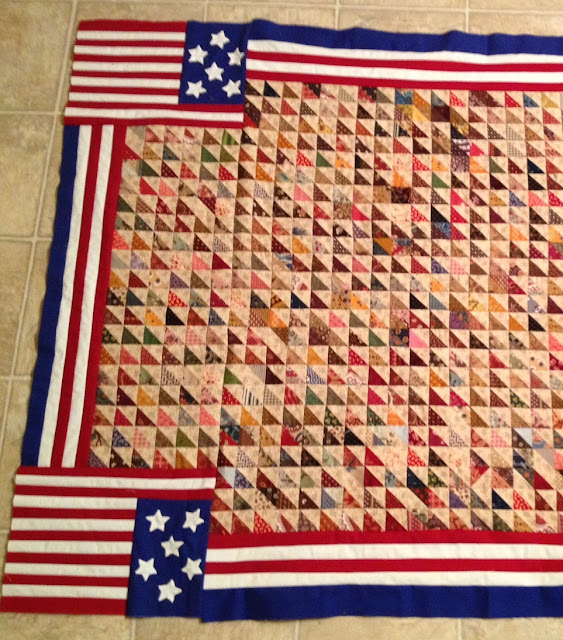 As you can see the blue stripe on the sides of the quilt are wider than the end blue stripes, but after trimming them, it wasn't too much different.

I embroidered 1862 in the corner of one flag to match the original, and then added my label on the back with January, 2016 as the date the quilt was made. 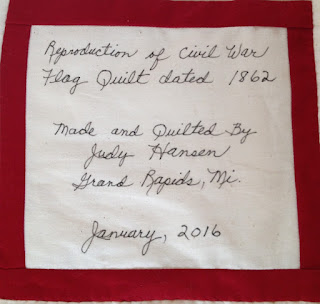 My replica was finished last week, and has now been sent off to be displayed at the Mid-Atlantic Quilt Festival in Hampton, VA.  The show is open February 25 - 28, 2016. so if you are in the area, go and say hello to it.  I will not be able to be there.

It was a lot of fun to make, and I look forward to hanging it in my house for patriotic holidays, once it gets back to me.
Posted by Judy Hansen 18 comments:

January has been very satisfying in that I finished, bound, labeled, and put sleeves on three quilts.  They are on their way to Virginia for a group display at the Mid-Atlantic Quilt Festival, in Hampton, VA February 25-28, 2016.  Here are the details about two of them.  I'll save the third one for next week's post.

The blocks The Churn Dashers exchanged were nine patches and snowballs.  I blogged about making my quilt (Here). On a comment on that blog post, Laura V. requested details on how I made my quilt, and today I will try to explain how I made this quilt and the measurements I used.

To refresh your memory, here is the quilt I saw on the Quilt Index: 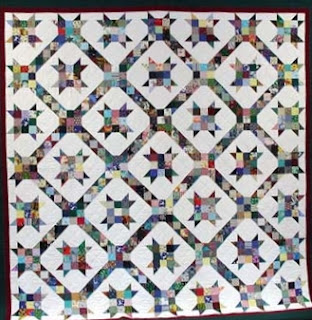 Here is my quilt, using the nine patches and the snowball blocks from the exchange.  It measures 82" by 93". 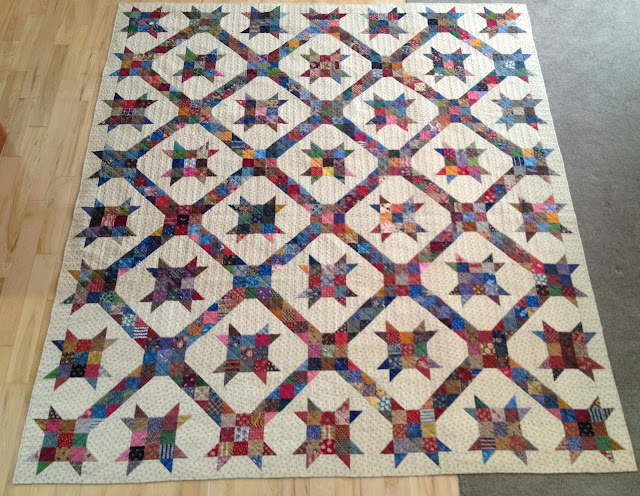 I also made a small doll quilt to match it, and here it is with my little dolls: 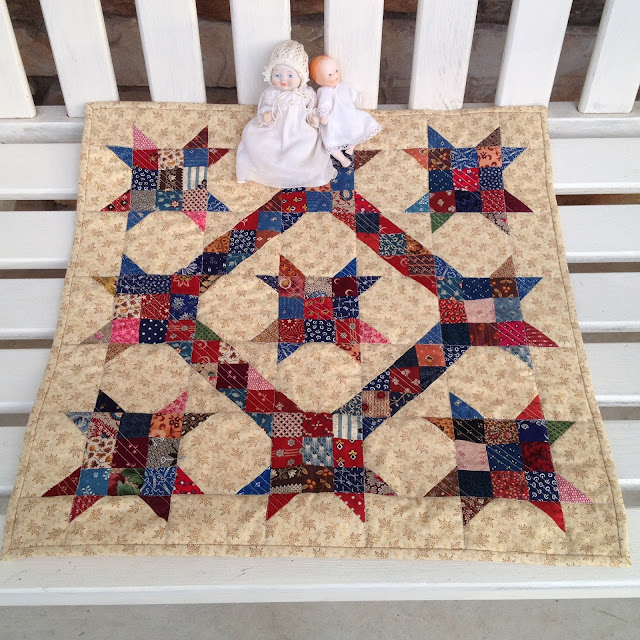 Details for the large quilt:

The block exchange was for 6 inch blocks, so the nine patch pieces were cut at 2.5 inches square, and finished 2"+2"+2" to be 6".  The requirements were to make them of dark and medium dark civil war repro fabrics.  The snowball blocks also finished at 6 inches square.

For this quilt, I made an additional block that has three 2 inch squares down the middle diagonally, and has four triangles - all of the dark and medium fabrics.  The background fabric is cut at 5" square, and then cut in half, to use on the sides of this block.  The block is then trimmed to 6.5" unfinished size.  You can see where I creased the two background fabrics to find the centers, to guide me in attaching them. 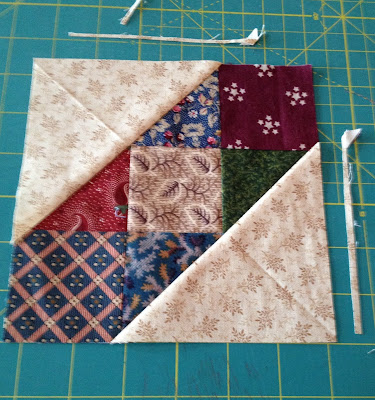 The outside border row background pieces are cut a little bigger than on the original quilt.  I wanted to have the stars float, and also save myself the grief of possibly cutting off a star point with the binding.

The blocks are then arranged as per the picture of the original quilt, and sewed into strips, and then into a quilt top.   Here is a picture of the strips: 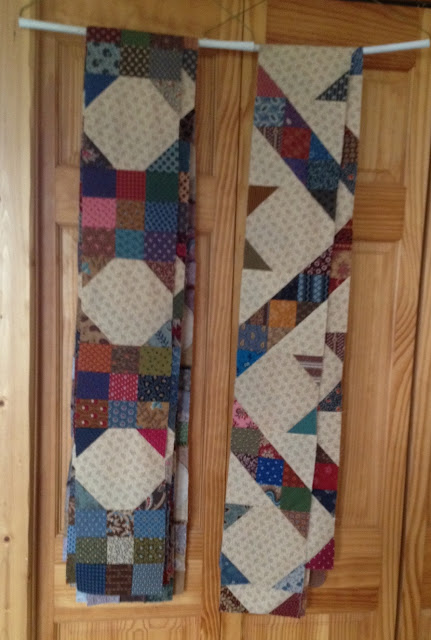 I divided the block measurements in half, and the doll quilt blocks measure 3" by 3" finished, with the completed top measuring 19" square with the borders.

My binding was cut at 2 inches, and folded in half before applying.  Years ago, I started quilting with 2.5 inch binding size, and then moved to 2.25 inch.....and now I'm happy with 2 inch cuts.  I don't forsee making binding any narrower.  What size to do cut your binding strips?

I'm linking up with Design Wall Mondays today, to see what others are working on today.  (Here)

Finishing the Baby Quilt and Getting it Ready for Gifting

My latest baby quilt is finished and I am getting it ready to gift to Eliza, a beautiful new baby girl.  I can't wait to see her in person. 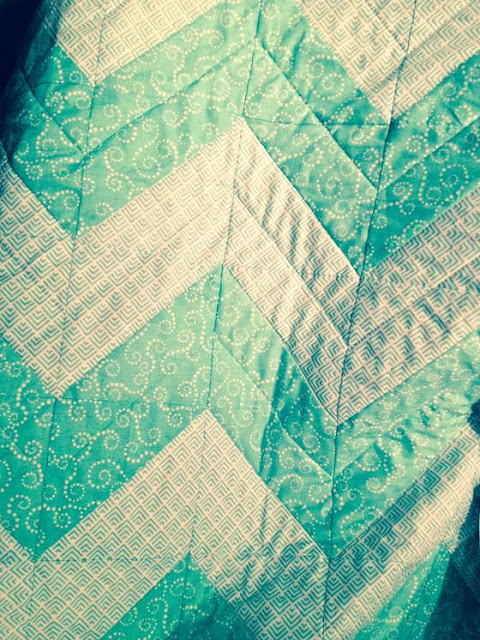 I quilted it following the zigzags, which was easy. 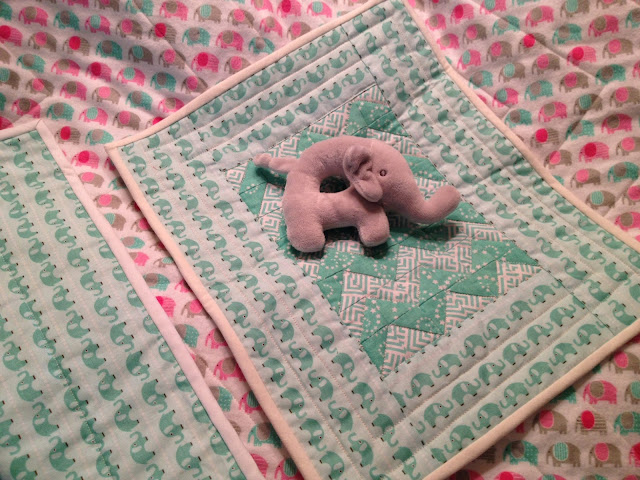 The doll quilt finished at 10.5 in. by 13 in. and the little hst's are 1 inch.  We found a little elephant rattle to wrap up in the doll quilt. 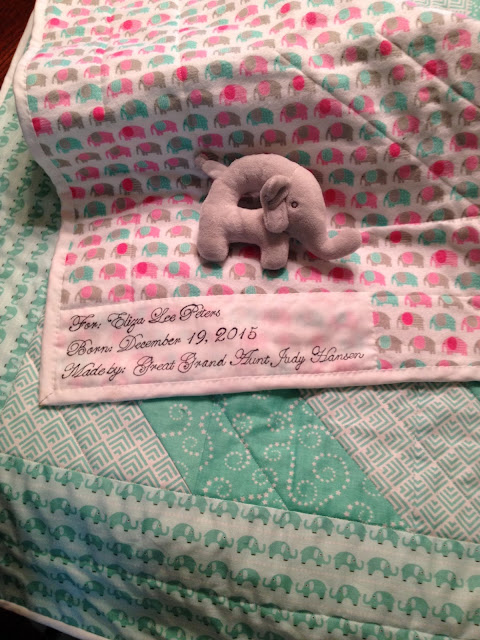 Here's the label.  I had to look up exactly what my relationship to the baby is. Her Grandmother is my niece.  I'm her Great Grand Aunt!  What a mouthful! 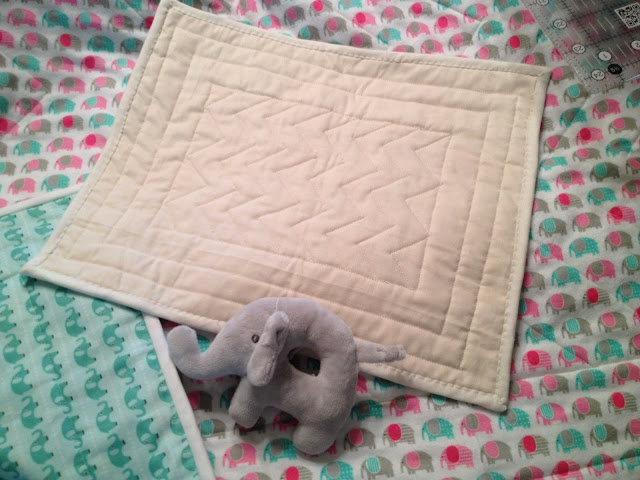 Here is the back of the doll quilt, with the small zigzag quilting.  It was such a fun project, and my last two finishes for 2015. 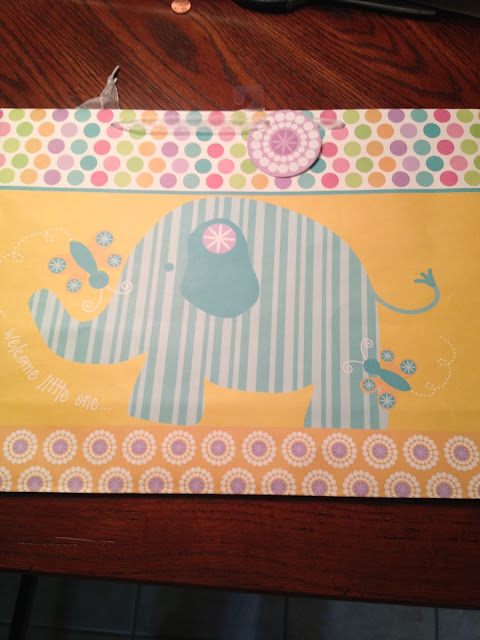 Look at the cute bag I found at the Dollar Store to put the gifts in!  It's an elephant themed baby gift, that is for sure.

I am in Texas visiting our daughter, and will deliver this gift on the way back home.