Well June is almost over; I can't believe it.  I did take three quilts to a long-arm quilter, so that is something quilty, but not much else has been happening around here.  I brought my redwork with me while at the cabin, and here is the latest block that I'm working on - two chickens: 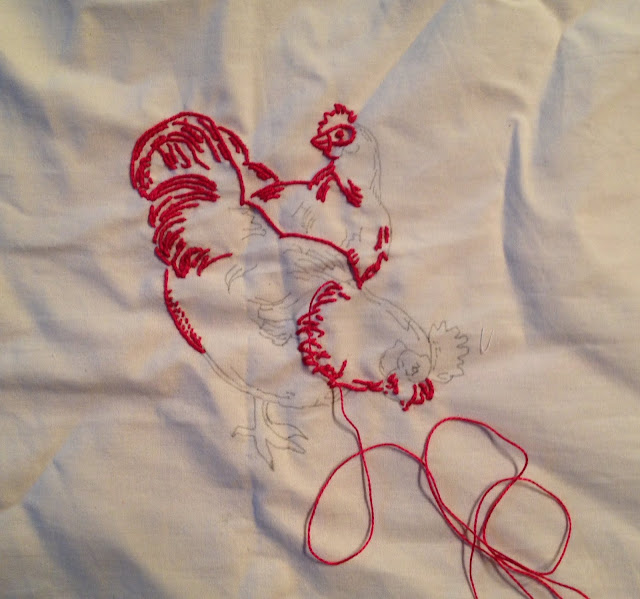 My question to you is:  Just how many chickens should be in this redwork quilt?  Why do I ask?.........well, here is a block that I finished a long time ago, for this 64 block quilt: 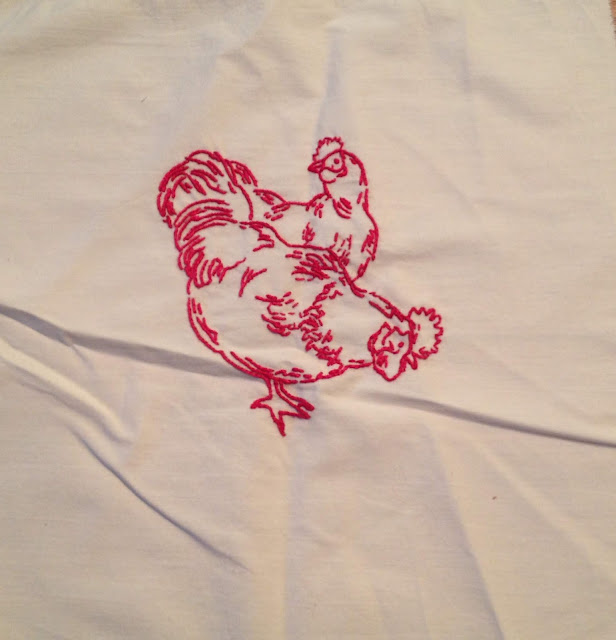 So part of me says throw away the half finished chickens block, and part of me says finish it, and put them both in the quilt - it will make someone wonder years in the future why there are two squares just alike in the quilt.  What are your thoughts?

I have two two chicken blocks......is it just too too much? 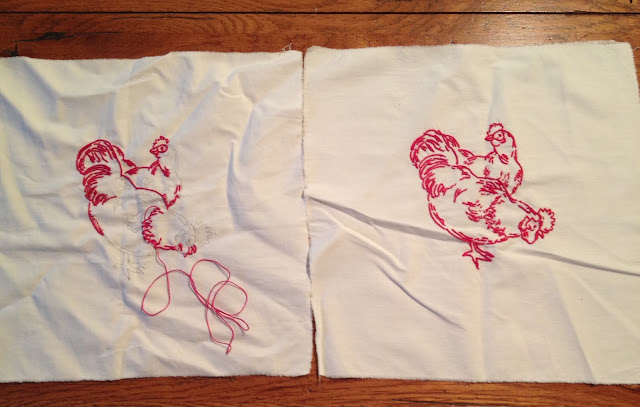 Here are Penny pictures for those of you who have asked for more pictures of her.  At dinner time:  three meals a day, and each time she acts like she hasn't eaten in a week - so hungry and so quick to eat and drink that she often has the hiccups after eating. 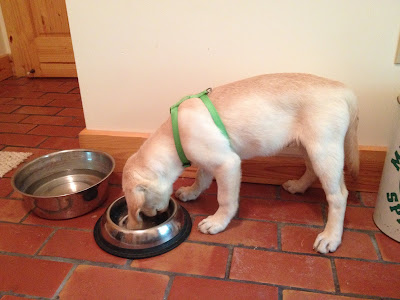 On the front porch of the cabin - ready to face new adventures every day.  I think this is her version of being "on point" when she hears something or smells something new: 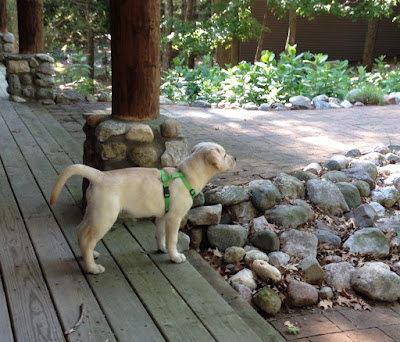 Basking in the sunlight in the living room, with a bone:  She chews on everything, so I try to keep a bone nearby, as a substitute for whatever she shouldn't be chewing on: 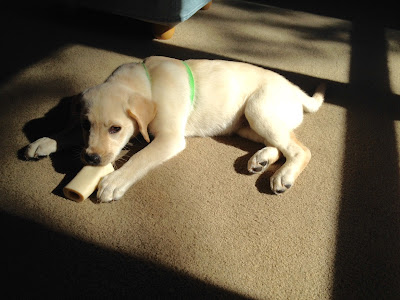 What have you been working on?  I am looking forward to seeing all of your design walls today!  Thanks for participating.  The linking rules are as usual - please include a link back to this particular post somewhere within your blog post.

Email ThisBlogThis!Share to TwitterShare to FacebookShare to Pinterest
Labels: Redwork

I think it's fine to keep a duplicate in a quilt if they won't be right next to each other, it's likely no one will notice. But if it really bugs you, then leave it out.

I vote for having 2 two chicken blocks in the quilt. If you have another block of which you are very fond, you might even have two of it also. I have not heard of the quilt police giving a citation for such an offense yet. Penny is a sweetie. I need a service dog for PTSD and I also have fibromyalgia. I am concerned about the amount of care that the dog is going to need with my fibromyalgia. On the other hand, I'm excited about the benefit I will receive from having the service dog. Regardless of your decision about the two chicken block duplication, I pray that you will be happy with your decision. Susan

thank you for the aweeeee pictures of the baby. I have a standard poodle, and had a lab. They can get bloat if they eat quickly or run around too hard right after eating.
Puppies burn calories at a fast rate, so she probably feels like she is starving!!

Your porch is so inviting
LeeAnna at not afraid of color

there is no such thing as too many chickens, whatever the form!

I don't think anyone will notice the duplicate blocks if there are 62 other blocks to look at! The other thing you could do is make two of EVERY block design, and say it was on purpose. But definitely keep and finish both blocks -- your redwork stitching is too beautiful to go to waste!

I’d put both of them in, as I’m partial to redwork and chickens

If you don’t want to put two the same on the front, put it on the back as your signature block. Too cute not to finish and use.

two chicken blocks will not be too many, make 3 even!

There are special dog bowls that slow down the gulping eater so they do not have the indigestion or whatever from eating too fast. I've seen them advertised on facebook.

I would use both blocks and make it a 'find the two that are a like' for kids.