Here is a picture of my exchange blocks on the design wall.  It went very quickly using the new (to me) method.  Since my blocks finish at 3 inches square, I started with a light and a dark fabric that were 4.5 inches square.  They all turned out the right size when the process was finished.  I would never have thought up this method, but it sure was easy.  Each column is for a different person. 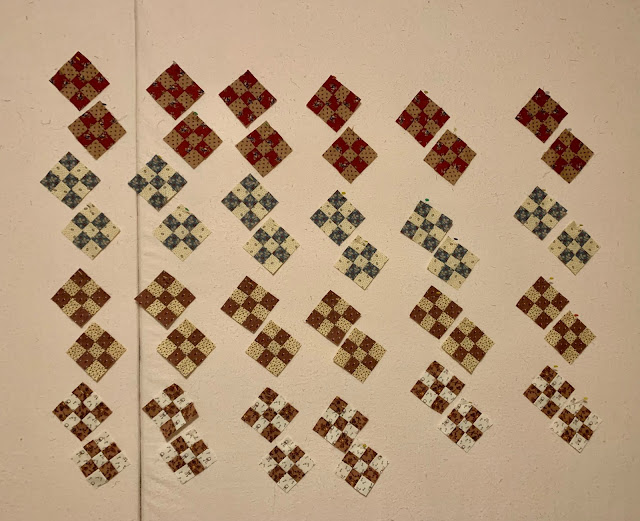 I noticed some fabrics I chose were “directional” and this method made it easy to make all the squares in each nine patch go the same direction.  Such as these keys on a ring in the shirting fabric below: 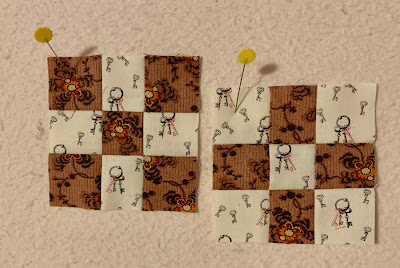 Also the embroidered baskets are multiplying on the other end of the design wall.  I have a plan to make about 15 of them into a quilt. 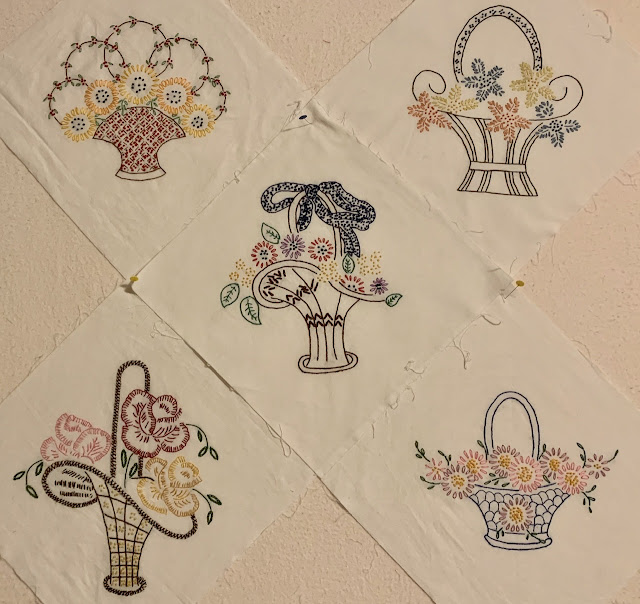 These vintage baskets were designed by someone who loves French knots! Just look at this basket: 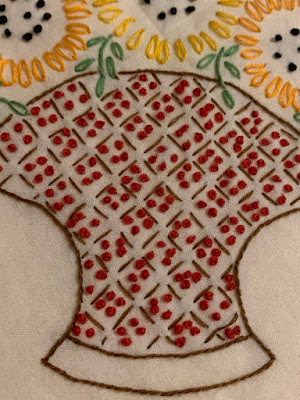 How will a long arm quilter quilt this for me?  Will the French knots cause trouble for them?  I know that is a problem for the future - not now, but if any of you have any thoughts on quilting embroidered French knot projects, I'd love hearing from you.

What are you working on this week?  We'd love to see it!  Just link up below and we will be encouraged by your progress.  You keep me inspired.  All I ask is that you link back to this particular blog post from somewhere within your blog post.  Thanks!

I have no idea how a long arm quilter will deal with the french knots but those knots are so cute. Have a great week!

Your baskets are lovely--hugs, Julierose

You are making good progress on both of those projects. I would guess the long armer would have to do a diagonals across that basket to avoid the knots. But as I don't quilt, I'm probably not a good one to comment.

the dots are cute, with the way they do long arm quilting I don't know how that works it works easy for hand quilting!

For the love of geese said...

French knots were something I was never able to master. I have no experience quilting around them either, perhaps the quilter could do a basket weave around them.

Your embroidery blocks are so pretty!
I don't know anything about long arm quilting, but if I was going to quilt it on my domestic machine, I would echo quilt around the baskets and do some hand stitching in the baskets just to accent.

I also just learned about that way to make 2 nine patches at a time. I was so fast and turned out very accurate. The embroidery blocks are adorable.

Nine patches never get old! Love your basket blocks. I have a BH&G publication called Century of Quilts (from 2002) that has some photos of basket blocks from the 30s very similar to yours.

I just learned that technique this weekend, only my squares aren't even 9 patches, they are kind of wonky!

That is a very interesting way to do a nine patch. Who are the genius quilters that figure this stuff out? My brain doesn't work that way! I love your vintage baskets, so charming. Spring is right around the corner.

I have used that method for 9-patches before and it is truly fast. Those embroidered baskets are sensational. So sweet!

Those baskets are so lovely!

Lots of great progress going on in your sewing room! If I were quilting an embroidered top with French knots, I’d probably outline around the basket and not quilt through it.