Redwork at the Basketball Games

We went to Chicago to watch Michigan State's league tournament this last week, and I brought redwork with me to work on while there.  Basketball has changed since the games are now all televised, and there are lots of breaks in the games.  College games are divided into two 20 minute halves.  Television dictates they have four planned timeouts during each half:  one for each time the clock is less than 16 min., 12 min., 8 min., and 4 min.  Also each coach gets to call 5 timeouts during the game.  The TV timeouts are 3 minutes long.   During the NCAA tournament coming up, the TV timeouts are even a little longer. AND, there are big breaks between the games.  The ticket gets you into the building for two games, and there is time before the game starts, and about 25 minutes between the two games.  But I say all this to explain that I got a lot of redwork done during the breaks in the games.

They hand out lots of free things at the games, and I have a new lanyard, which proved very useful for my handwork.  I inserted the roll of Perle cotton floss on the lanyard, and attached my scissors to the clip at the end. Viola!  Everything needed is right in front of me!  I don't use a hoop with embroidery, so I was good to go. 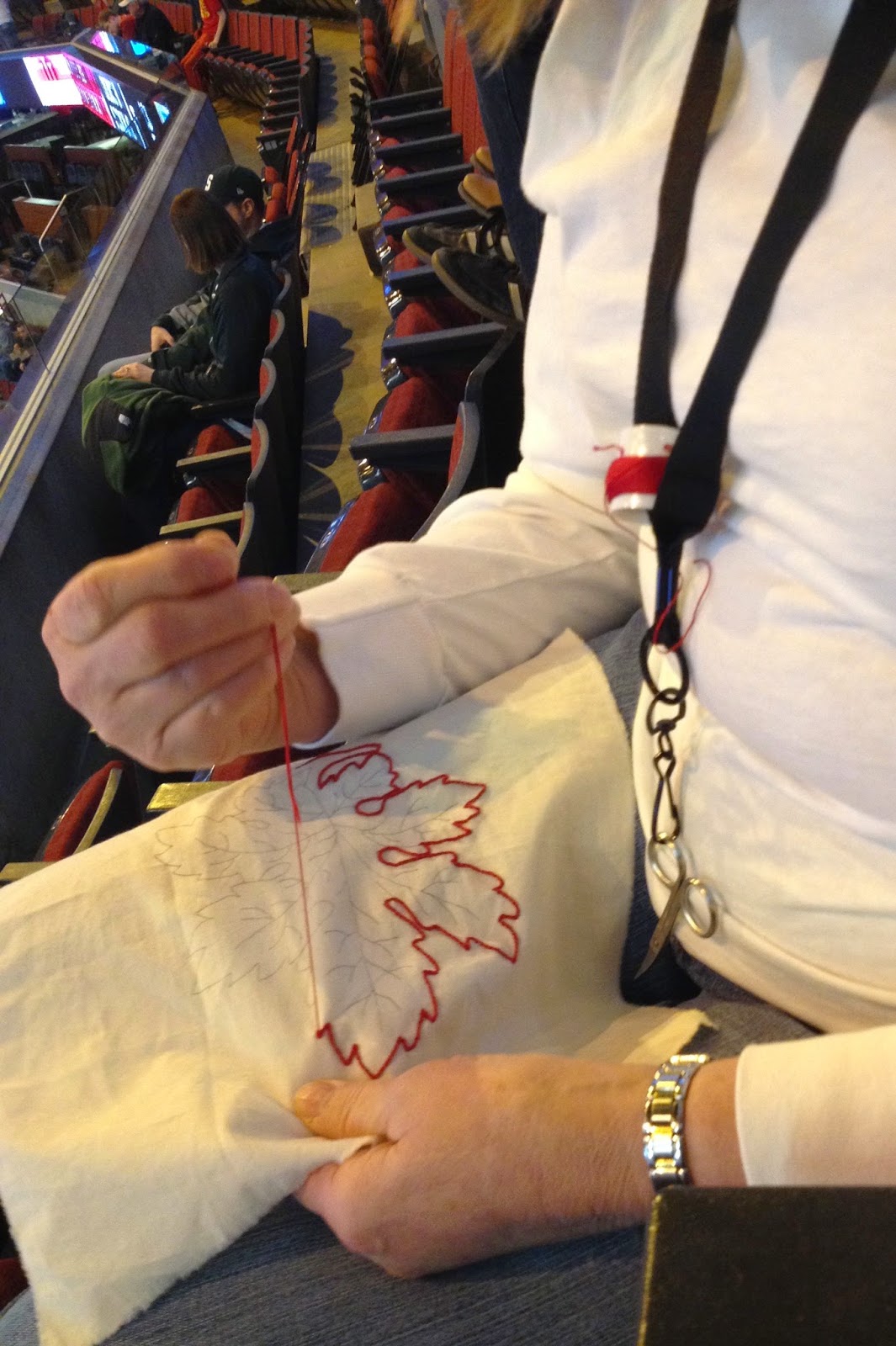 Here are the 2.5 blocks finished/started in Chicago: 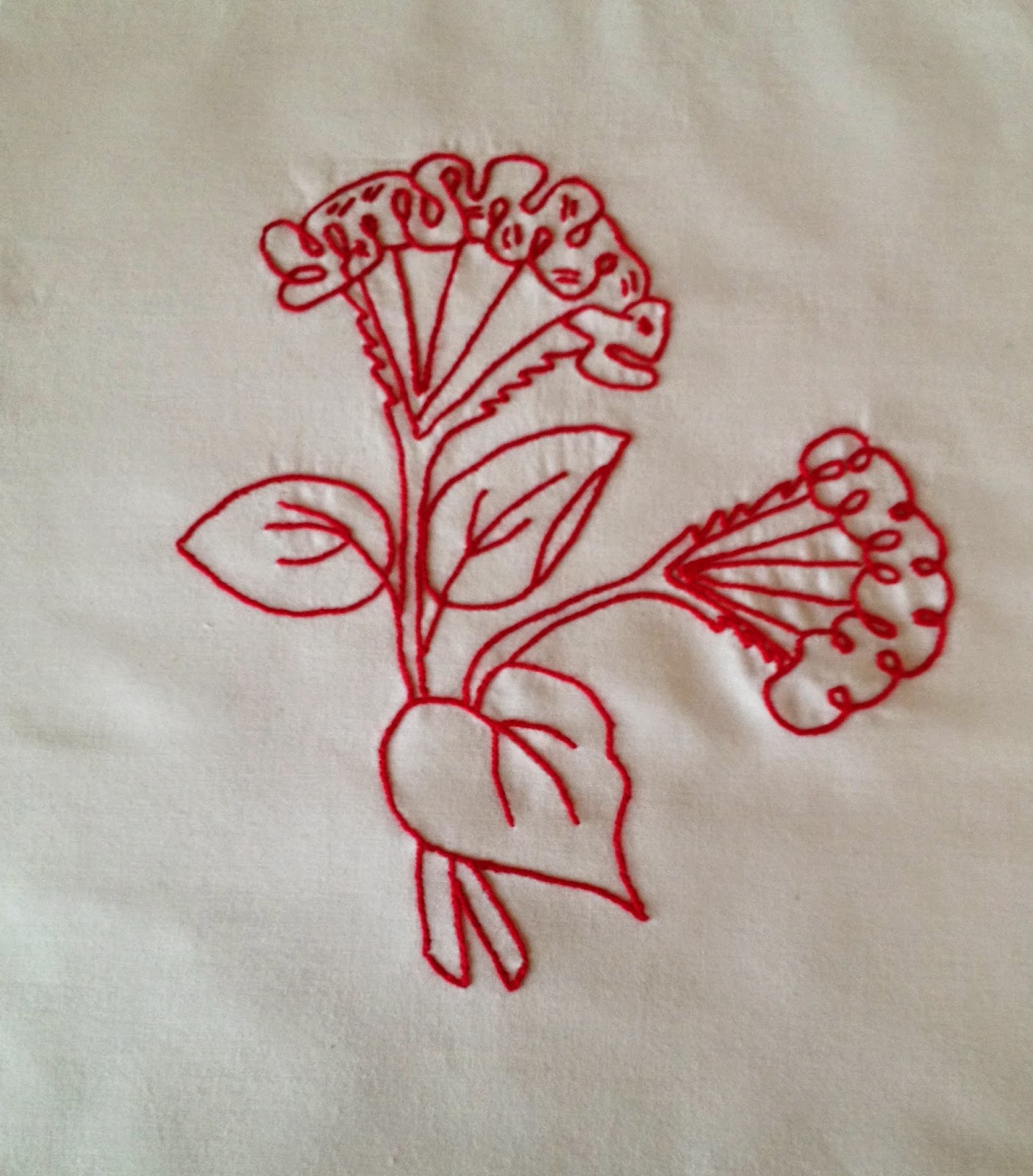 This flower looks like cockscomb, which is so beautiful in the fall. 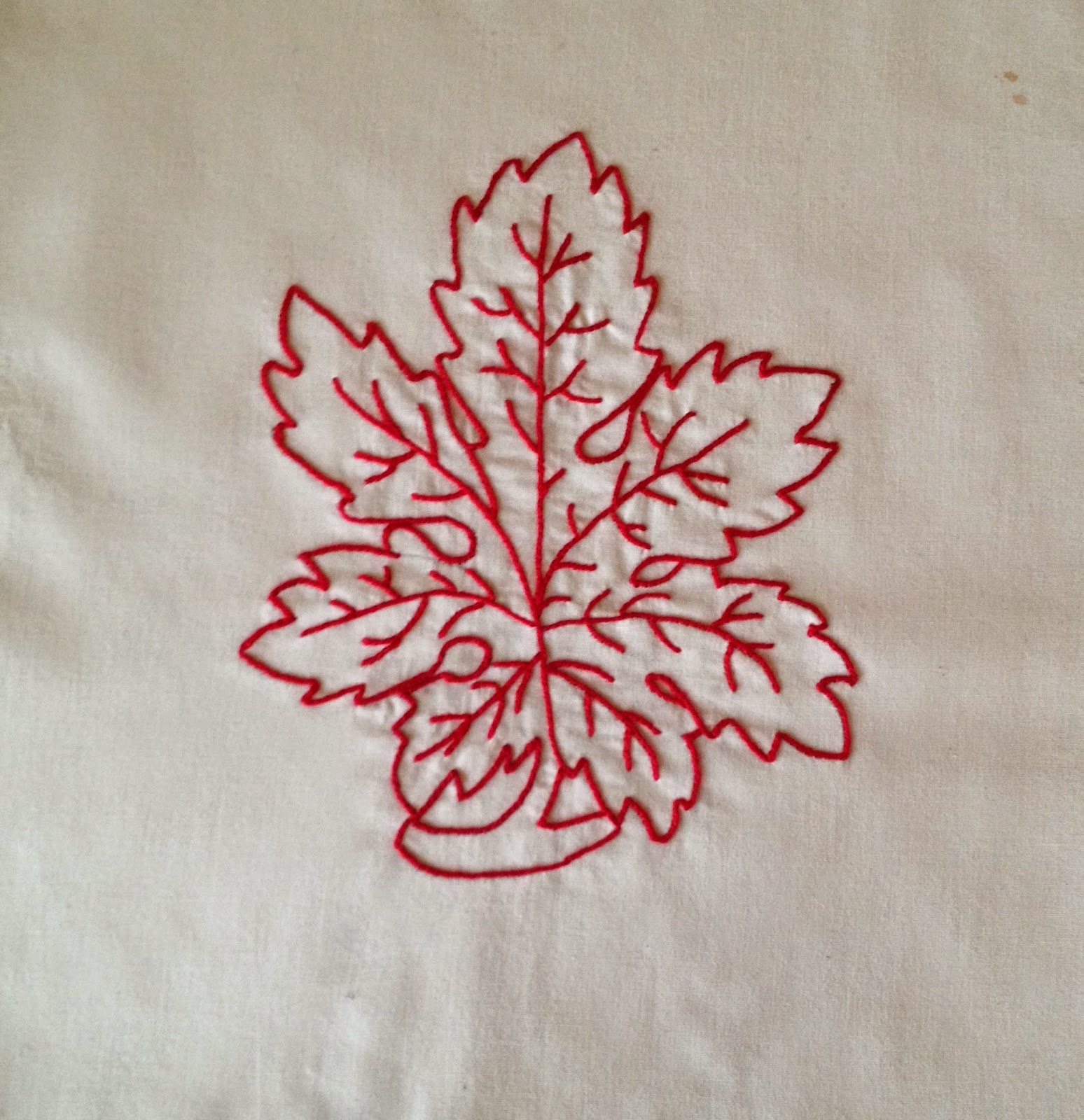 An oak leaf to represent my forest here at the cabin. 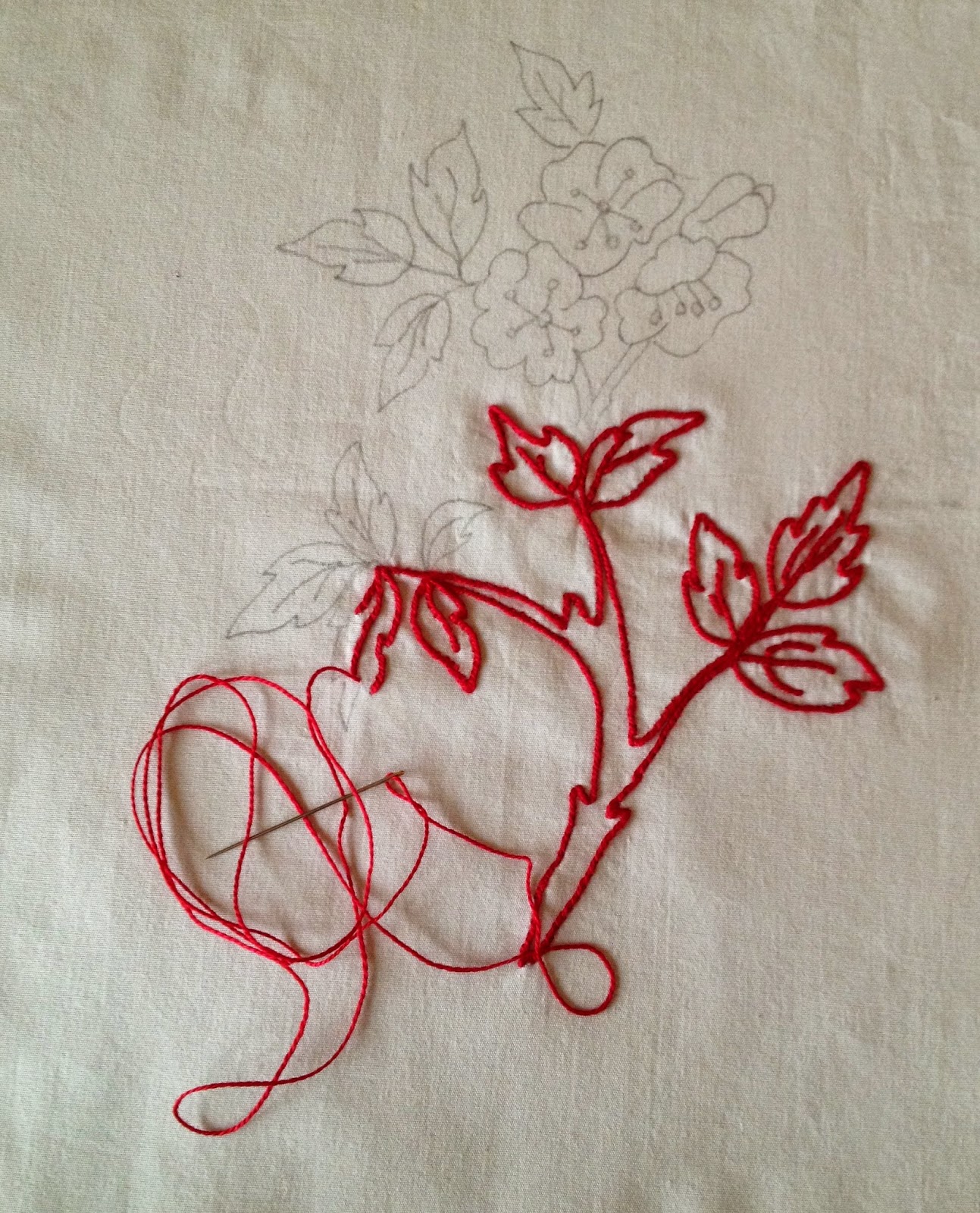 This is one of the many flower blocks in the original quilt.  Looks like wild roses to me.

If you are wondering why we aren't using all of the original designs, here are two of them that were included in the patterns: 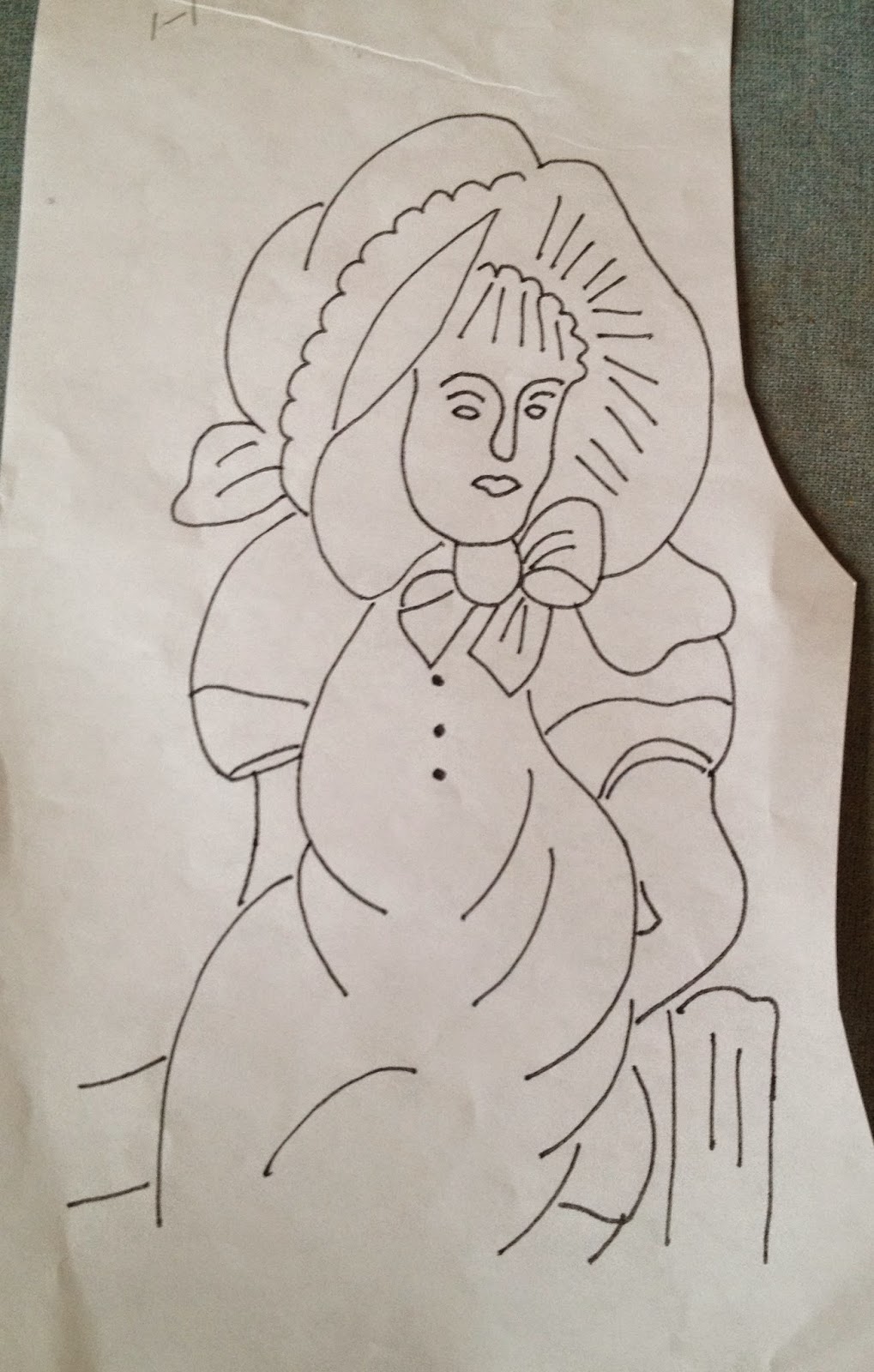 A lumpy lady with a hat three sizes too big.....and her face....maybe something got lost in the translation from the original quilt....I like to think so anyway. 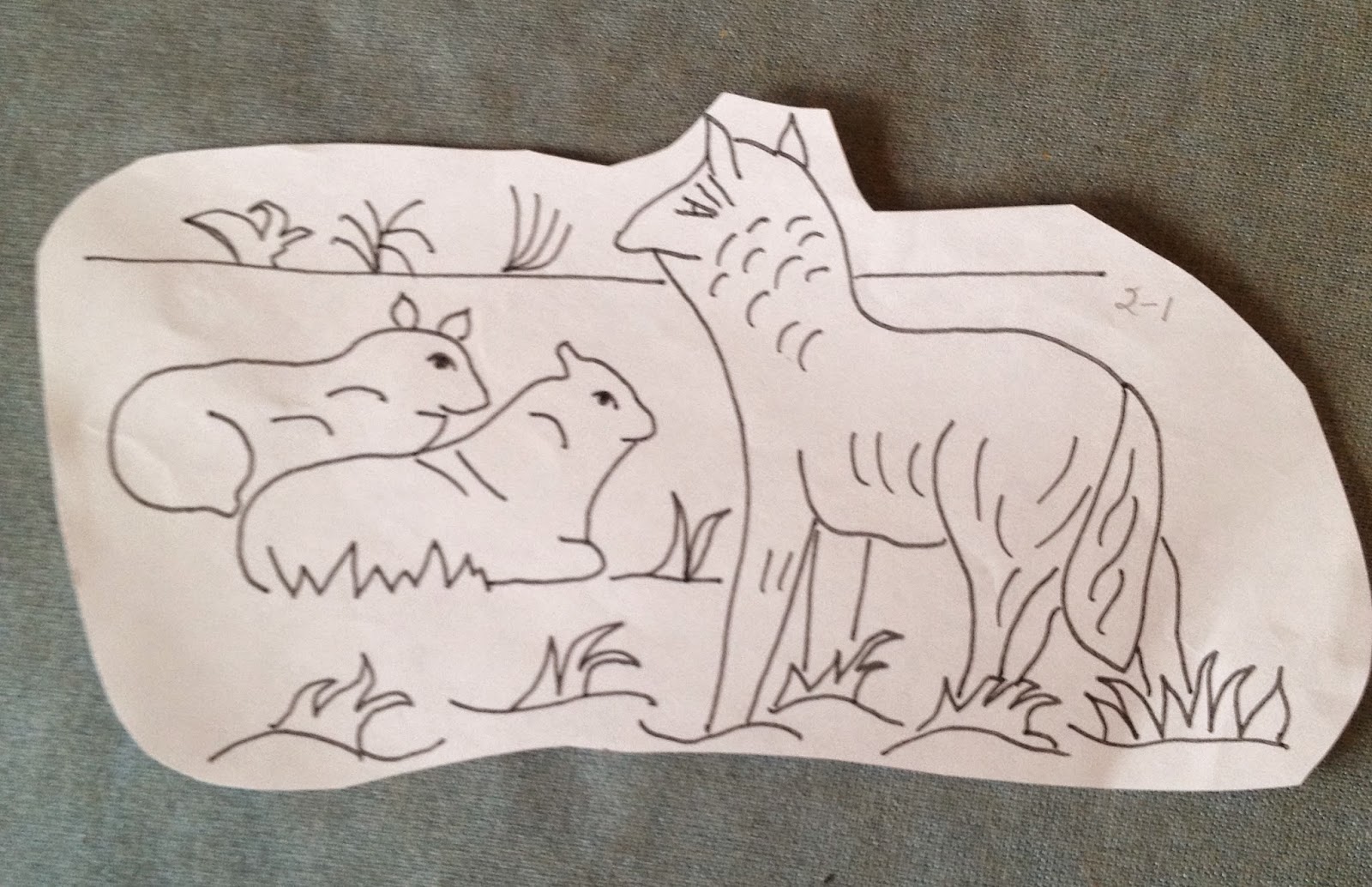 A wolf with a serious overbite who is gazing at two sheep and some sprigs of something on the horizon.................did the original wolf have the overbite?

Dee and I are going to Paducah again this year, and I hope the vendor has the original quilt on display there, as I want to take a closer look at some of the squares. In the meantime, I am working on the squares that I like, and have set some of them aside for now.  What are you working on this week?

I'm linking up with Judy Laquidara's blog for Design Wall Mondays, as I like to see what others are working on today.   (Here)

I'm not always sure if the "lumpiness" was part of the original drawing or the result of the needlewoman followed by tracing...a lot can get lost (or added!) in the process! Love the idea of the lanyard!

English paper piecing 60 degree diamonds. All neutrals which will be shaded from light to dark is some manner, and then applique on it. Target size, 40".

Are you using stem stitch or back stitching Judy? You are doing really lovely work.

I like the design with the lady in the hat. I always seem to take notice of the redwork designs with people involved in them.

Val; I am using the stem stitch, and occasionally a French knot where needed. It's simple work, but very soothing to me.