It's been a rainy week here, so the first thing I'll post is the Barbara Brackman blocks of the week  (info here)


Progress on this week's block (cut out and partially assembled):

Progress on 34th Street, my version of Bonnie Hunter's Mystery, but it seems like I'm going at turtle pace, (mystery site)


Go to Design Wall Monday - some others are still plugging along on Bonnie's mystery too - and there's lots of other inspiration!  (click here) 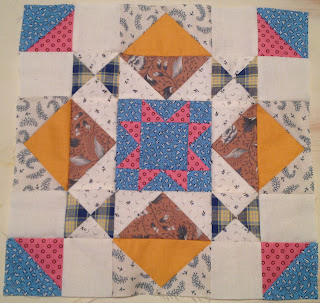 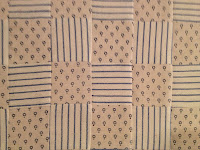 The two little dolls, Sophia Grace and Rosie, watch me at the sewing machine, and look a little unhappy that I'm not working only on doll quilts.  I did sew the back of a little red and white quilt for them, but after making it, I like it too much for a back, and will make a Valentine's quilt with it.  Here's a closeup of the squares.  It will be finished by Valentine's Day, but they still look like it's not enough.  Tough audience, aren't they? 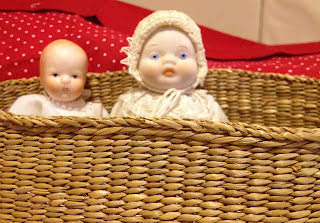 I'm having fun this morning, starting on "Abundance", a little doll quilt from a tutorial at Lori's blog (here): 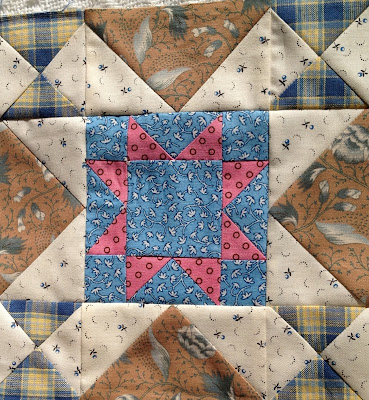 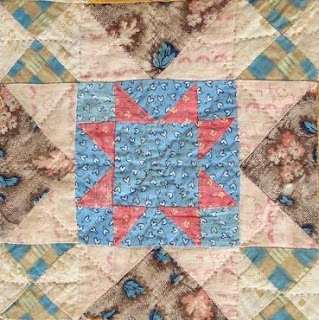 I'm also working on the backing for the little red and white quilt top: 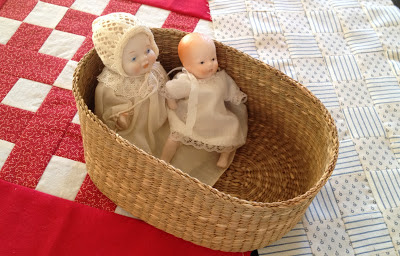 Sophia Grace and Rosie say Hi!  They can't decide which one of these little quilts they want me to finish first.

Keeping up with the Quilt-a-Longs

In keeping up with the Kardashians Quilt-A-Longs, I am forcing myself to resist most of the new ones just starting up.  I want to finish Bonnie Hunter's mystery quilt first.  So far:  I have 10 big blocks put together, and try to do at least 2 each day.  I still haven't decided whether to add a border to it.

I am keeping up with the suffragette's blocks from Barbara Brackman's blog (here) and have three more finished to show you:

The 21st block is an appliqued parasol.  The women used their parasols with messages printed on them (such as "Vote for Women") to further the cause.  It will be fun to make that block this week. Thanks Barbara Brackman for all the historical information, and the block fun.

When Lori of Humble Quilts blog (post about it is here)  wrote about a new little doll quilt-a-long, how could I resist?  After all, I do blog about small quilts and doll quilts!  So here is a picture of the little adorable quilt she is helping us make; I think she said it's 12 inches square. 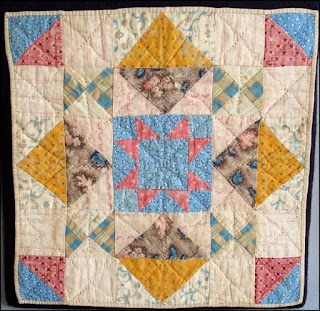 She has named her version "Abundance" and I am ready for the first instructions about it on Monday. I had fun picking out fabrics from my stash to get ready to start: 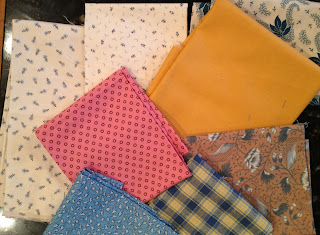 Replica of a Doll Quilt 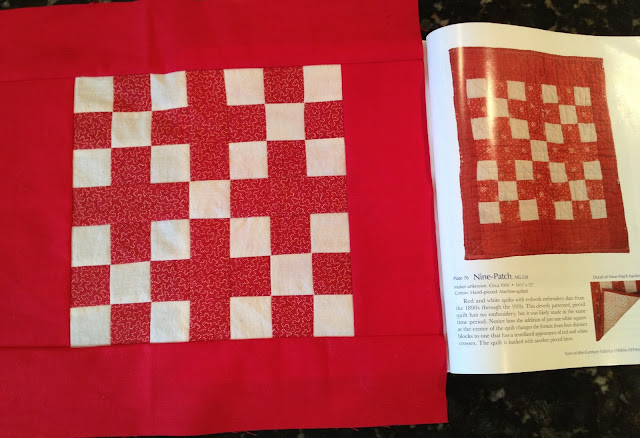 The book says "Notice how the addition of just one white square at the center of the quilt changes the format from four distinct blocks to one that has a tessellated appearance of red and white crosses."  I love the simplicity of this quilt.

The original quilt is backed with another pieced layer of two alternating prints.  I am going to make a backing of squares of these two fabrics: 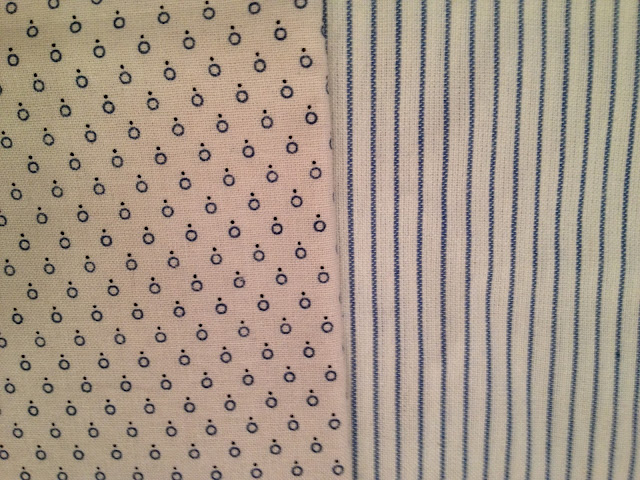 The little squares on the front are 1.25" square and the borders will finish at 2.5 ", so the doll quilt will be about 14"x 14" when finished.  The original had narrower side borders, and finished size was 14.5" x 12".  I like the borders the same width all the way around.

I will post about it again when finished, but I thought you'd like to see what I'm working on.

I'm continuing to sew blocks together on Bonnie's East Street Mystery quilt.  I had a suggestion from Janet (Rogue Quilter), to name it "34th Street".  She had me at hello, as they say, and I loved the idea.  So I have changed the quilt name to "34th Street".  Miracle on 34th Street is, after all, the best Christmas movie ever, and this is definitely a Christmas quilt.  It's also quite a miracle that so many quilters all over the world are sewing patches together on Bonnie's mystery quilts.  Thank you Bonnie, for all you do for us.  You are a blessing!  Bonnie Hunter's Blog


Several friends have asked me to explain how Bonnie's units are used in 34th Street, so I am explaining what the changes are.

The biggest change is to eliminate the on-point setting, and skip Bonnie's Step 7.  For the rest of the changes, here's how:

There are 13 of these squares, which I have named square "A".   If you study this picture, you will see that in it, there are five of Bonnie’s units across, and five down. So you could do the math, and multiply 13 times each one of the units, to find out how many of Bonnie’s units to make, to get you to 13 of these larger squares. For instance, the four patches are used 8 times, so 13X8 = 104 four patches needed.

There are 12 of these squares in the quilt. So, for the four patches units, the math would be 4 x 12, or 48 four patche units used. The only change I made to a different unit is the 3.5 in (3 inch finished size) half square triangles. I had solid white 3.5 inch squares per Bonnie’s instructions, and I wanted less white, so I changed them into half green and half white. There are eight of these in this square.  so I took 8 x 12, or 96 white units, and made them into half square triangles.

The large squares finish at 15 inches, and are assembled as alternating squares in five rows, as follows:

It will be 75 inches by 75 inches before any border.  Have fun if you decide to use this design.  I am loving all the Easy Streets!

Thank you so much for all the input!  It really helped me make decisions, and after playing with it some more, here is the final version:


Several friends were not too excited about the peppermint candy novelty print, so I pulled it out. (see version with candy print) I will use it in a future quilt, and many ideas about a candy quilt are bouncing around in my head. I still felt there was too much white in Block B, so I added light green to the white squares,  making them half square triangles.

This quilt before borders, is 75"x 75" and there are 25 blocks, each 15" finished size.  Five blocks across, starting with a row of A,B,A,B,A.  My best friend Dee and I decided this was the final, final version!

Below are layouts showing the pieces of Bonnie Hunter's Easy Street mystery quilt that are used in each block.

and a total of 12 of Block B:
Thanks again for all the input!  It felt like you were all here looking at my design wall with me!  I hope you like my final version.  Now, I am going to put the pedal to the metal, and get the blocks sewn together.  I can't wait to see all the Easy Street quilts on the Monday linkup.  Click on this link to see them:  Bonnie's link up post

If you listen closely, you can hear sewing machines humming this week, all around the world.........as people piece together Bonnie Hunter's latest mystery quilt, Easy Street.

My version is a Christmas fabrics quilt and I have had such fun with these squares - moving them around, mixing them up.  Here's the latest version on my design wall: 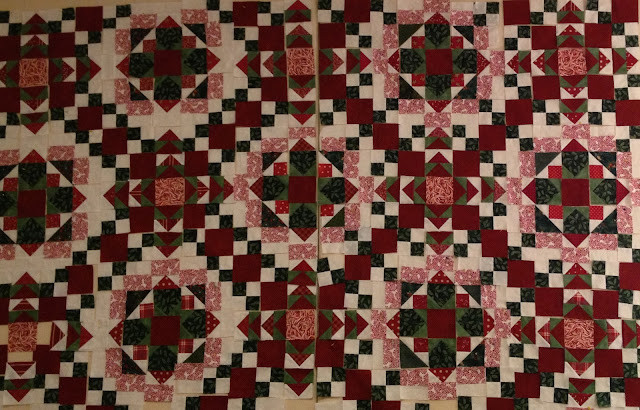 Here are the changes I've made (so far):

(1) I decided to skip the on-point version and make it a straight setting, with 5 blocks across and 5 blocks down.  I did this because I like the on-point look, and with this quilt, it looks on-point when it is done with straight rows.  Also, I wanted to make the quilt a little smaller, and when it is done in 5x5 blocks, before a border is added, it is 75"x 75".  Plus that also meant I could then skip Step 7 (setting triangles and corners) completely, always a good thing.  Bonnie's layout before borders is bigger (84" x 84").

(2) I changed block A center to give it a square within a square look.  Before the reveal came out, I was playing with the squares, and I liked this look, and decided to use it.

(3) I used the piece Bonnie calls a fat turkey in Block B instead of in Block A.  Since I had already changed block A, and had the fat turkeys to use, I put them into block B.

(4) I added some peppermint candy fabric into the white spaces, as my neutral in the mystery was all the same white fabric, and I thought there was too much white without adding something there.

(5) Now I am playing with the four patches, to decide whether I like the "X" design throughout the quilt to be more subtle as on left side, or more bold, as on the right side.

So after all these changes, it doesn't look very much like the other Easy Street quilts, but I am having a great time with it.

Do you like the four patches layout on the left side of the picture, or the right?

I also play around with changing the center 3" square in all the blocks.  Here's another picture with candy cane centers: 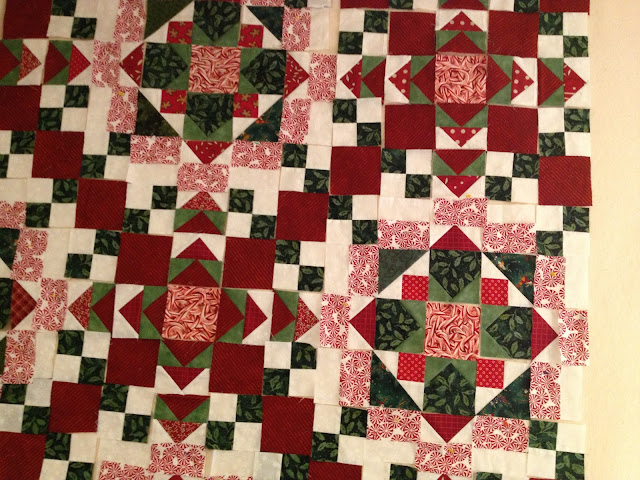 So I'm ready for Design Wall Monday, as I have my entire design wall filled with this mystery quilt, which I've named "Easy Peasy, Lemon Squeezy".