I finished the embroidered square I was working on, and started another.  This is the completed one: 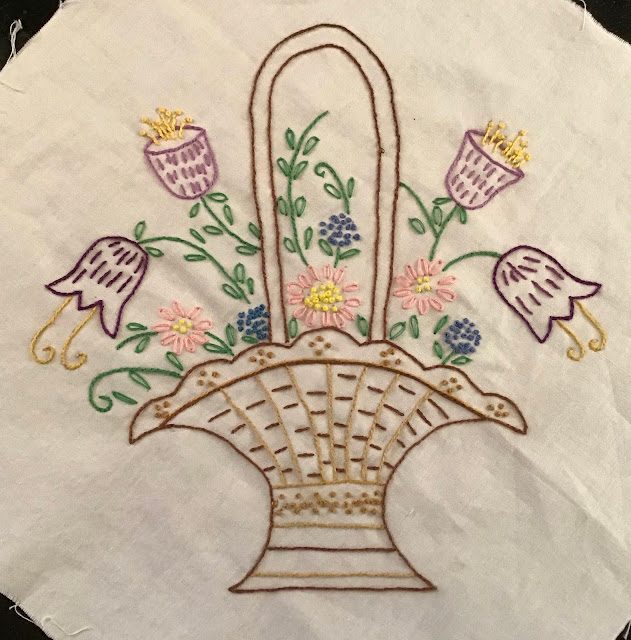 It amazes me that the same patterns are published over and over with different names as artist.  For instance, I just saw on the internet that Darlene Zimmerman had 2 panels called Laisy Daisy Baskets....with 8 baskets on each panel.  They all are simple versions of these baskets patterns from an earlier time.  Here is the panel with the above basket on it: 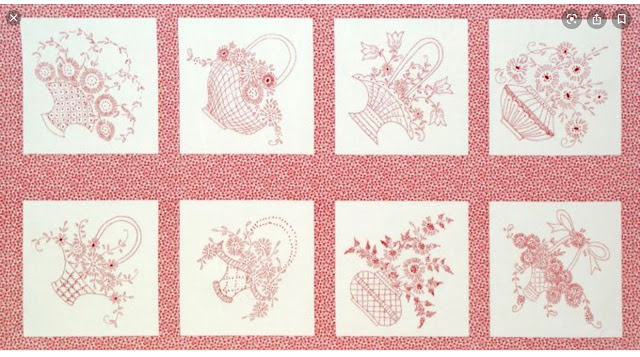 It is not a clear picture, but the basket “by Darlene Zimmerman” similar to the one I just finished is in the top row, third basket.  The other panel has a simplified version of the lilacs basket on it, also top row, third from left: 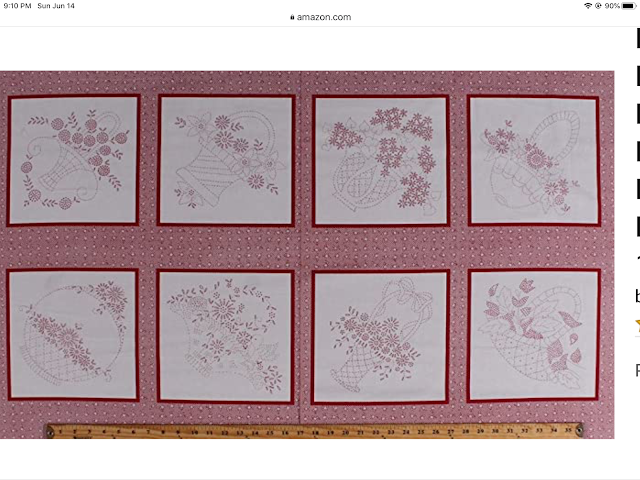 The week has been busy, and I’m still playing in the box of plaids.  I put together these little precut squares of brown checks, and another larger plaid.  Which version do you like better - the larger plaid set on the diagonal? 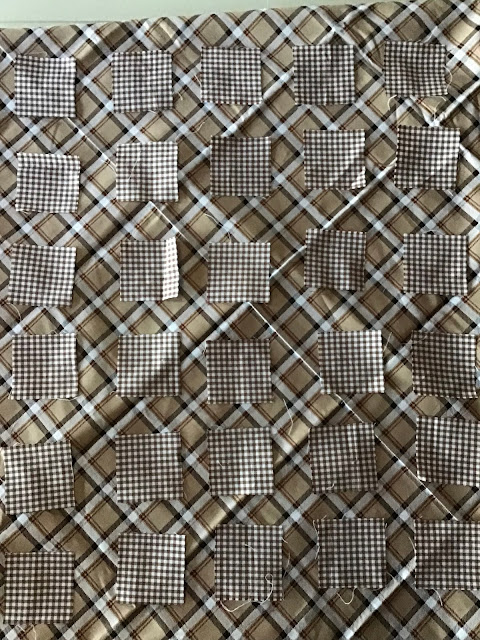 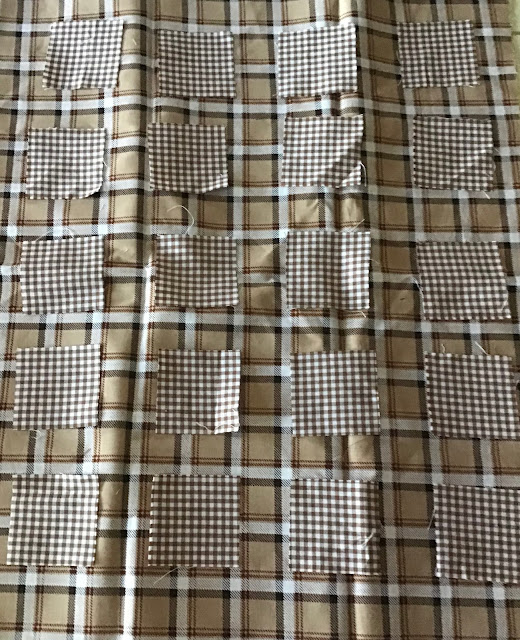 Or do you have any other thoughts on a two fabric quilt from these two?  I don’t remember cutting the little squares in the past, or maybe they were given to me.  Now it’s time they became a quilt.

Please link up and show us what you are working on.  Give me some lovely pictures to look at on my anniversary!  All that is required is that you link back to this particular blog post, and mention “Design Wall Monday” in your post. Thanks!

I like the plaid on the diagonal, I always like diagonal setting better than straight sets. If something is lovely, it's always in style! Happy stitching!

Happy anniversary!!!! Congratulations on a long and happy marriage. Hope you got to have a very nice anniversary date. Very pretty embroidery. I guess the copyright has expired on some of the older embroidery patterns so they can be used by others.

I forgot to add, I like the larger plaid set on the diagonal.

Congratulations on 57 years! Here's to many more!
I prefer the 1st option, the check squares with the larger plaid on the diagonal. It's interesting to see the old/new embroidery designs.

Wow, congrats on your anniversary!

Happy Anniversary! Congratulations on 57 years.
Regarding the plaid options, to my eyes the small squares are begging to be framed with a light solid, then they'll look good on either setting. As is, they're just too hard for me to differentiate from either background because there's no value contrast and both patterns are busy. I prefer the bias setting.

Hi Judy and Happy Anniversary. I had to look up 57 and see if there was a traditional gift for it ...there wasn't but it did say the modern is glass or mirror. Interesting.
I'm hopeless at choosing fabrics so I won't chime in except to say I have the faith in you to make the perfect choice.

congratulations on your anniversary mine is in a couple days from now.

Happy anniversary! I prefer the diagonal set with the plaids.

I like diagonal too... especially since the check print is cut straight.
Happy Anniversary! That's an amazing event to celebrate!

The diagonal setting makes the square pop. I'd pick that one.
Congratulations on your anniversary!

huge congrats on the anniversary. THis will be our 46th.

Happy Anniversary! I like the plaid on the diagonal.

Congratulations Judy on 57 happy and glorious years. I too love that diagonal setting for the larger plaid, just seems to work best.
I've noticed even this present day many ideas are then "stolen and tweaked" to commandeer the image and obscure the original designer. Sad to say....

The diagonal plaid background is more unique. I think that will work great.

Happy Anniversary. I was a June bride also. I really like the bigger plaid on the diagonal. It makes a much more interesting design. On the other hand you will be having fun with a lot of bias edges. It's hard to believe that current day designers would put up with borrowing their designs. It's been interesting to see your embroideries take on a life.

Happy anniversary! Throwing in my 2 cents... I like the plaid on the diagonal.
MelvaLovesScraps(at)NolanQualityCustoms(dot)com

Congratulations on your wedding day.

Happy Anniversary! We're behind you a few years, celebrated 35 in February, but still happy together, a wonderful thing to have.

Love your stitching. So interesting to see different designs just tweaked a bit.

I think the plaid on the diagonal is fun with the tiny gingham check.

Congratulations!
The baskets are beautiful.

Love the diagonal. The straight set doesn't have much interest, IMO anyway. I've nothing to share in your linky party but had to stop by to see what you accomplished this week. The new block looks fantastic.

I vote plaid on the diagonal...it has more energy. :)

Happy Anniversary!
We celebrated our 57th wedding anniversary one week ago on June 8th
Hard to believe -- so many years yet it doesn't seem that long.

Congrats on your Anniversary!! I like the diagonal plaid best.

Diagonally makes for much more interesting visual texture, but will also mean lots of bias!

Your baskets are just so charming! I like the diagonal set, for sure!

Beautiful embroidery! happy anniversary to you

Hope you had a wonderful anniversary! Love your baskets.